From the book: Green Technology Strategies

Methods and tools can be used in the planning, development, operation, management and maintenance of systems for Energy saving and to plan Materials Use.

This is both for estimating the the carbon footprint of ICT and how it may be used to reduce emissions in other sectors by using ICT.

The study excluded consumer electronics in the home: TVs, video, gaming, audio devices and media players. Specialised electronic devices, such as medical equipment was also excluded. Different assumptions would need to be made for organisations in specific industry sectors. As an example, a games software developer could not exclude computer games and a hospital not exclude medical devices.

The Climate Group carried out three phases of their study:

The Climate Group used published estimates of global emissions and penetration rates of ICT devices and infrastructure. Estimates of population growth were then used to calculate future emissions in 2020. Data was from public studies; academic and industry literature; the team experts, consumer surveys and interviews with external experts.

The analysis attempted a "cradle-to-grave" estimate of carbon emissions: manufacture, transport, use and disposal of equipment.

Embodied carbon: CO2e in manufacturing of ICT components was calculated from public and company data. Embodied energy in end-of-life treatment: disposal, landfill and recycling, was included where data was available.

Market growth and penetration of devices to 2020 was based on industry reports and internal analysis. Growth in use of ICT and general industrial growth is more significant in developing areas of the world.

The Climate Group used a cost curve to identify emissions abatement solutions ranked by cost. The study concentrated on areas where emissions are significant: power; manufacturing; industry; transport; residential and commercial buildings; forestry; agriculture; and waste disposal. ICT applications were then assessed for use in reducing in emissions abatement on the cost curve. Four uses for ICT were then selected for detailed analysis.

The Climate Group were undertaking a high level global analysis and therefore used some very general assumptions in their analysis. As an example: 20% of desktops are workstations, Workstations consume 2.5 times desktop in all modes, Commercial usage of a computer is 14 hours/day versus consumer usage of three hours/day, Three types of servers: 200, 500, 6000W/unit. These assumptions are listed in "The Enabling Effect Assumptions" (Appendix 3) of the report. An analysis for an organisation may use locally developed estimates or actual measures, but may also use these same assumptions, in order to enable a direct comparison.

The Climate Group made assumptions as to the effect ICT could have on other industry areas. As an example, it was assumed that Online media would replace DVDs and CDs. This assumed seven billion DVDs and 10 billion CDs globally were sold per year, with 1 Kg CO2e per CD/DVD and all this would be replaced with network delivery of content by 2020. Similarly electronic documents were assumed to reduce paper use by 25%. Organisation based studies should be able to use better estimates or local measures of disk and paper use.

Computers Off Australia (COA) provide instructions to Configure power management for PCs (2008) and two versions of an Energy Savings Calculator, to estimate the resulting savings. The Consortium for School Networking provide an Energy Usage Calculator specifically tailored for schools.

COA provide instructions to configure power management for operating systems including Apple Mac, Microsoft Windows XP and Vista. They recommend setting computers to enter system standby or hibernate after 15 to 30 minutes of inactivity and set monitors to enter sleep mode after 5 to 20 minutes of inactivity. On laptops, these need to be activated in the AC power profile, as well as battery power) profile.

COA provide a Power Management Calculator. The web based form prompts for the number of Monitors and Computer boxes to be power managed and the price of electricity (with 12 cents per kWh as the default in Australian average), Hours in Workday and Days in Work week. Defaults are provided for the Active Power and Sleep Power (in watts) used by monitors and PCs. Estimates of the proportion of units power managed, Units Turned Off After Work are used and Tons CO2 are calculated.

From the book: Green Technology Strategies

This book is about how to reduce carbon emissions and achieve other environmental benefits by using computers and telecommunications technology. It is designed to be used within an online course for professionals, using mentored and collaborative learning techniques.

These notes are used for the courses:

The notes were first published as an electronic and paperback book in 2009 (Green ICT, Tom Worthington, Tomw Communications, 2009). Students can download or print their own copy of the e-book from the course learning management system, which is likely to be more up to date. 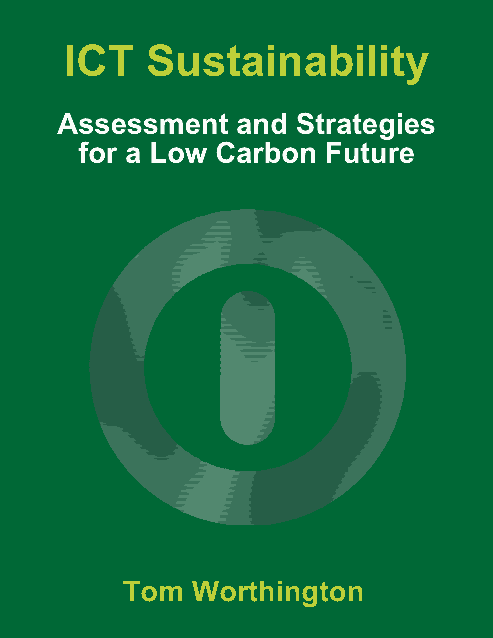