IT issues on 666 ABC Canberra Drive with Keri Phillips each Wednesday at 5:50pm

Broadcast World 2002, is being held in Sydney on Wednesday 27th February 2002. Tom WORTHINGTON will talk about the conference and in particular the New Technology panel session he is speaking at. Tom argues broadcasters haven't yet worked out what the Internet is:

Free-to-air and pay-TV operators are making the same mistakes which bankrupted many Internet companies. New technological capabilities do not guarantee a return on investment. Lessons can be learned from the failure of WAP to provide a viable web service on a mobile telephone and the success of the simpler i-mode technology. There are lessons to be learned by the broadcasting industry in middleware development, operational rollout, video-on-demand and storage when implementing Internet based technologies, such as MHP and TeleWeb.From: New Broadcast Technology

These issues are particularly relevant to Canberra, as Transact is a rival to traditional broadcasting and Canberra is home to several of the world's leading experts on technology needed for digital broadcasting.

This is a photograph of a TiVo digital video recorder which I have described it as the broadcast industry's worst nightmare. The TiVo is a Linux based TV device. This one was modified to work in Australia by Andrew Tridgell, a Canberra resident and a world leading IT expert: 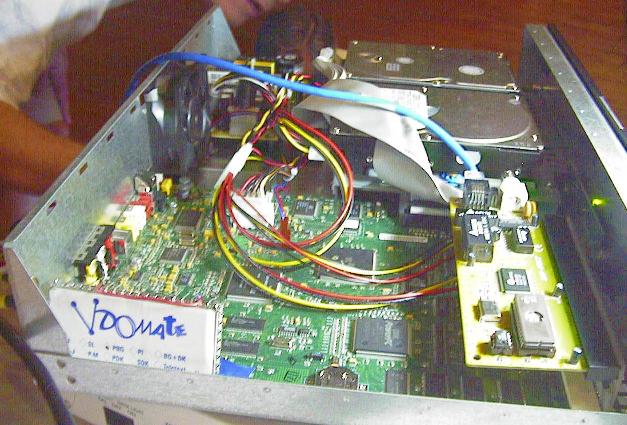 I got truly amazed when I found out that Tridge and friends, not satisfied with adding more hard drive space, soldering memory on the motherboard, reverse engineering the proprietary connector on the motherboard and turning it into an ISA bus, turning a Tivo entirely into a PAL capable device, they reversed engineered the video format, got video from the Tivo to play over the network on outside computers, figured out the TV guide database format and wrote programs to make their own database feeding for Australia through information automatically gathered by scripts on a web TV guide. I mean these people created a new Tivo product from the existing one before Tivo, and with no technical help or docs from Tivo whatesoever.

Bob Edwards is experimenting with is low cost set-top-box Internet TV appliances. These could then be linked to low cost super-servers, similar in design to Bob's award winning Bunyip, supercomputer at the Australian National University.

"... Some planned services are available on request for each individual listener at all times, but the casual listener who 'tunes in' – in fact, the listener will get on the internet, open a browser, type in abc.net.au, and continue to the DIG site – is most likely to listen to a 24-hour stream of unannounced music while using the computer. The listener who wants to know the name of the tune being played at any given time can read the name of the tune and the performers on screen after a single mouse click. The music- and other arts-orientated station won't be live, and won't carry news and current events. These are already available from other parts of ABC Online..." From: New radio for you to dig, originally published in The Weekend Australian, December 8 - 9, 2001.

Comments and corrections to: webmaster@tomw.net.au